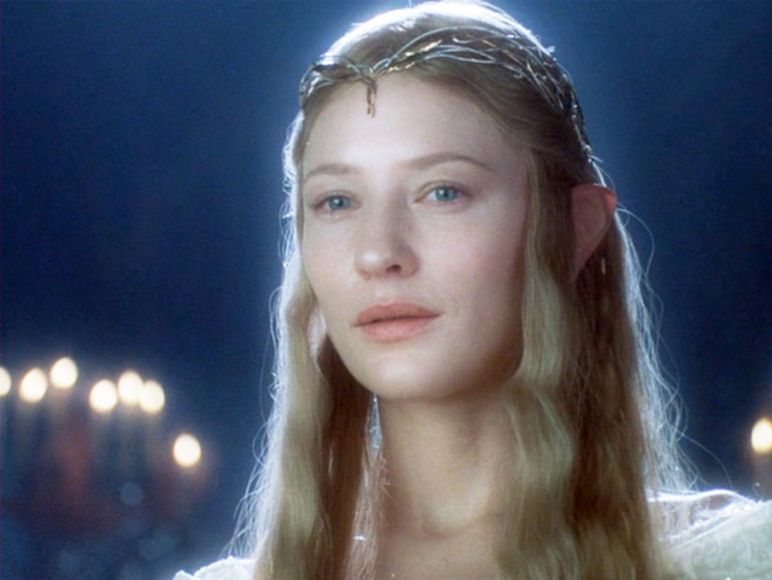 True to her word, Storm led Legolas through the main gates of the City of Galadrium before the setting of the sun.  Legolas was dazzled by the city’s beauty.  Massive staircases spiraled around the trunks of trees larger than anything Legolas had ever seen.  He could see platforms of every shape and size above his head.  Silver light shone from above and everywhere he could hear the sound of singing.  Storm led him to the base of the mightiest of these trees.  She told him that this was where Galadriel and Celeborn dwelled.  A sentry at the base of the tree greeted Legolas’ person with recognition and shared the happy news that his horse had found its way into the city.  The sentry informed Legolas that he was to lead him to the guest quarters where his belongings awaited him.  Legolas was to prepare for a dinner in his honor— the scouts had given ample warning to expect Legolas this night and Lord Celeborn and Lady Galadriel had everything at the ready.  The sentry nodded with formality to Storm before leading Legolas away, “Your aunt is expecting you in her chambers Lady Nevlotwen.”  Storm said her goodbyes to Legolas and began to climb the tall white ladder to her aunt’s private sanctuary.

As was her want, Galadriel said nothing to Storm when she first entered the chamber.  She gazed at her intently, allowing Storm to approach her in silence.  Storm stood several feet before her aunt, her eyes of shifting colors meeting Galadriel’s eyes of starlight without wavering.  “Dearest Nevlotwen, you have saved a prince and lost your heart, I believe. A busy two days.”

Storm’s cheeks flushed a deep red at her aunt’s teasing tone.  “The Prince of Mirkwood. . . surprised me, aunt.  You were right to advise me not to pre-judge him.  He is very different than I imagined.”

“And yet, you do not plan to see him again,” Galadriel said shrewdly, circling Storm slowly.

“No.”  Storm looked at her feet to avoid her aunt’s all-seeing gaze.

Storm raised her eyes reluctantly from her feet.

“You are telling yourself that is it loyalty to Ainaloss’ memory that will keep you away from the banquet tonight.  I call it fear.  Fear of your own feelings.  Fear of his.  Fear that if you allow yourself to feel love again that you will also be allowing yourself to face loss again.  Fear is what really eats your heart to shreds Nevlotwen; we already know that you can survive loss.  Let go of all this fear, dear one.  It is time to live again.  It is time to let another ease your loneliness.  Isn’t that what the Prince of Mirkwood was trying to communicate to you this afternoon?”

“Aunt Galadriel, Legolas of Mirkwood is a kindly soul.  He showed me courtesy and respect and empathy, that is all.  He is grateful that I saved his life.  He is mindful that I am your niece. He will go to the banquet tonight and meet my lovely and accomplished cousins and forget all about Storm of Lothlorien.  It is better that way.  I would make a poor wife for a prince.”  Storm said firmly.

Galadriel gave Storm another long, measuring look.  “I believe that decision would be best left for Legolas of Mirkwood to make.  It is his life.  I am surprised Nevlotwen, that you would knowingly lead a man you care about into the arms of Alkorewen, Bulefaniel and Bragolanpaiel.  You have seen into his heart and know that he does not wish to wed someone who cares more for his title than for himself.”

“They will learn to care for who he is,” Storm replied.  “It is hard not to.”

“For you, perhaps.  But do you really believe that your cousins will first see his goodness or his Kingdom?  Do you believe they will see the beauty of his heart or the beauty of his face?  Will you doom him to lifetimes of unhappiness because you are afraid?!” Galadriel held Storm’s eyes in an unrelenting gaze.  Storm considered her aunt’s words for a long time before asking to be excused.  She had a great deal to think about.

4 thoughts on “Heart of the Storm – Chapter Eight”