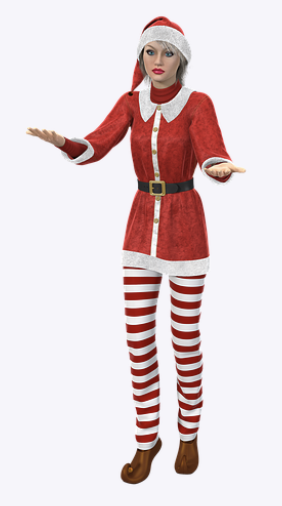 She was not the usual Santa
corpulent and whiskered
in baggy red pants
and loose jacket
stretched to fit his belly.
No she was something special,
something out of the ordinary.

At first the reindeers were a little nonplussed
when her mini-skirted elves
with green spiked hair
and bright red lippy
loaded presents
on to the very ordinary sleigh.
But they were impressed
with the practicality
of her red stripy leggings
as she climbed up
into the driving seat
and were happy
to spread their wings
and fly through the stardust
at her command.

The presents were delivered as usual though
and this Santa enjoyed the mince pies and sherry
left out for her in every home.
Not everything had changed!

Lynn White lives in north Wales. Her work is influenced by issues of social justice and events, places and people she has known or imagined. She is especially interested in exploring the boundaries of dream, fantasy and reality. She was shortlisted in the Theatre Cloud ‘War Poetry for Today’ competition and has been nominated for a Pushcart Prize, Best of the Net,  and a Rhysling Award. Her poetry has appeared in many publications including: Apogee, Firewords, Capsule Stories, Light Journal and So It Goes. Find Lynn on her blog and on Facebook.