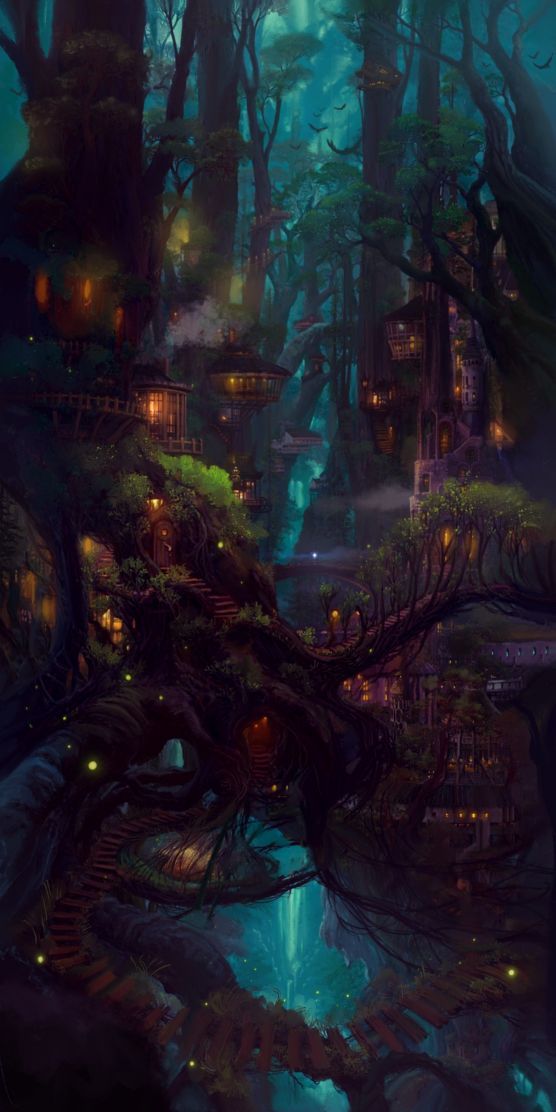 Legolas appreciated the honor being bestowed on him by the people of Galadrium, but if he was honest with himself, he would rather spend a quiet evening resting and reflecting on the events of the last two days over dressing up in formal clothing and facing a hall of strangers.   He could feel all eyes upon him as he entered into the great hall, could hear their whispers behind raised hands as he passed by.  As instructed by the sentry, he approached the head table and presented himself with a deep bow to Lord Celeborn and Lady Galadriel.  They were as beautiful and timeless and as powerful as he was told they would be.  Lord Celeborn greeted the son of Thandruil warmly and asked him many questions about his journey.  Lady Galadriel met Legolas’ gaze with an intensity that reminded Legolas very much of Storm.  He felt Galadriel had learned everything she ever needed to know about him in that one long look.  She raised a delicate eyebrow and asked, “Are you healing well from your injuries, Prince Legolas?”  Legolas read a thousand meanings into her words.

“Yes, my lady.  I have received excellent care.”

“I am glad to hear that.  Come sit by me and I will introduce you to the rest of our household.”

And so it came to be that Legolas sat by the Lady Galadriel’s side and was presented to the flowers of her court, as well as others held dear by Lord Celeborn and Lady Galadriel.  Everyone was well-mannered and attentive but he found himself very much missing Storm’s familiar face and easy conversation.  As time passed, he became more and more concerned that she had fled back into the woods and that he would never see her again.  During one of his many scans around the room for her, Legolas heard Galadriel say in a low voice, “Do not give up hope yet, Legolas of Mirkwood. Nevlotwen may surprise even herself.”

Legolas was finishing a glass of wine when a hush fell over the room.  Legolas followed the eyes of the crowd to the doorway.  Framed by the intricate archway, Storm stood alone, only Storm as he had not seen her before, never imagined her.  She wore a simple dress of scarlet, trimmed with silver embroidery at the sleeves, neckline and hem.  The dress clung to her womanly form in a way that made Legolas doubt his senses for having ever mistaken her for a lad.  Her hair fell around her shoulders in a cascade of dark curls.  A simple circlet of silver at her brow and a choker of silver with a single emerald at her throat.  In a hall filled with pale beings clad in shimmering white and pastels, Storm was the sunset.  Legolas saw blush stain her cheeks at the many eyes upon her before she took a deep breath and walked steadily toward the head table with resolve.

It seemed an eternity to Legolas before Storm crossed the long hall to reach his table.  She curtsied deeply before her aunt and uncle.  Galadriel’s voice sounded almost amused.  “Prince Legolas of Mirkwood, I believe you have already met my youngest niece, the Lady Nevlotwen.”

Storm bowed low before Legolas, meeting his eyes when she rose.  He had no idea of how long they gazed at each other before he found his voice.  “Lady Nevlotwen, you are  full of surprises.”

Storm gave Legolas a wry smile.  Lord Celeborn gave Storm leave to join her cousins at the family table.  Legolas marked the not-so-carefully-concealed glares cast at Storm by the Ladies Alkorewen, Bule and Bragos as she made her way to her seat.  Legolas felt a certain satisfaction when Storm ignored these looks and greeted each of her cousins cordially.

Legolas soon found his attention reclaimed by others at the table.  He answered questions politely, complimented the City of Galadrium, and tried to give his undivided attention to everyone he was introduced to.  However, he found that his eyes kept straying to where Storm sat.  It was as if Storm felt his gaze like a touch.  She would raise her head slowly and Legolas would find himself captured by her eyes.  Each time this happened he would lose the thread of the conversation swirling around him and all he would be able to hear was the beating of his heart.  He thought the many coursed meal would never end.

Lord Celeborn finally declared the end of the feast and welcomed the musicians.  There would be dancing this night.  Legolas was well trained in the ways of the Elven Court and understood that he must dance with each female member of the House of Lorien, in the proper order, as to give no offense.  He glided across the floor of the massive hall first with the Lady Galadriel.  Although she spoke only of general pleasantries, Legolas could still feel careful evaluation in her look.  She nodded to him thoughtfully at the end of the their dance.

Legolas followed protocol and next asked the Lady Brago to dance.  She was the eldest of the maidens.  She danced with elegant precision while asking him question after question about court life in Mirkwood and about the role and duties of its future princess.  Lady Alkorewen then floated ethereally in his arms and asked if Mirkwood was a place of beauty and culture.  Legolas found Lady Bule light on her feet and quick to smile.  She shared droll Lothlorien gossip and was the only one to mention Storm.

“I heard the Lady Galadriel say that you had already met my cousin Nevlotwen before the banquet.  However did that happen?”

Legolas did not care for the tone of her voice but answered her cordially.  “I owe the Lady Nevlotwen my life,” he said simply.  “She found me after I was attacked by Orcs.”  Bule gave a delicate shiver and wanted to hear every detail of his battle with the Orcs.

Legolas was weary in spirit and body by the time he escorted the Lady Bule back to her seat.  He searched for Storm but he could not see her in the room crowded with twirling couples.  At a light touch on his arm he turned to find Storm standing before him, holding a steaming goblet.

“You will over-tire yourself with this pace.  This should help replenish your energy.”

Storm extended the goblet to him.  It was a mulled wine, fragrant with herbs and spices.  Legolas drank deeply and felt some of his weariness lift.

Storm looked at the crowd around them.  “It is close in here.  Would you like to take some air?”

Legolas nodded his agreement and followed her out a cunningly hidden opening in the wall that led to a quiet balcony.  The City of Galadrium spread out before them, sparkling as if lit by starlight.  He and Storm stood silently at the railing gazing out at the magnificent sight for some time.   Legolas took another deep drink of his wine.  He had wanted to be alone with Storm all evening and now that he was, he felt was at a loss for words.

It was Storm who finally broke the silence.  “And what do you think of my fair city, Prince Legolas?”

“It is as I always dreamed it would be, but perhaps even more enchanting.”  He answered truthfully.

“And are the maidens of the House of Lorien pleasing to you, Prince Legolas?  Did I do them justice when I described them?”

Legolas felt less neutrality behind this question.  He chose his words carefully.  “I have found the lovely maidens of Lorien very pleasing and much as you described them.  Your observations of the Ladies Alkorewen, Bule and Bragos were quite astute.  However, as I have spent little time this evening with the Lady Nevlotwen, I must withhold final judgment a little longer.  You did not tell me that she was such a woman to be reckoned with.”  A smile lit his face, but he found his heart beating rapidly, afraid that he would again blunder.

“And have I finally convinced you that I am indeed a woman, Legolas of Mirkwood?” Her tone was light and teasing.

Legolas stepped back a little and examined Storm slowly from head to toe, his admiration clear on his face.  “Storm of Lothlorien, you have convinced me that you are the loveliest woman in Lotharian and I the biggest fool for not realizing that the moment we met.”

Even in the low light of the balcony, Legolas could see the color rise again to Storm’s cheeks.  “Prince Legolas, you flatter me.  I am well aware of how I pale next to my cousins, who are the embodiment of Elven beauty.  Please do not fear for my feelings, I have had many years to accept my fate.” Storm spoke without irony.

“Storm, I know that you do not know me well but be assured that I am not one to offer empty flattery to feed another’s ego.  I am merely stating fact.”

The words hung between them awkwardly.  Finally, Storm laughed.  “Forgive me.  I am rusty at this Legolas of Mirkwood.  I believe the correct response would be to thank you politely for the compliment.”

“You are most welcome,” Legolas smiled into her eyes.  Legolas and Storm stood side- by- side, self-conscious.  They again busied themselves with looking into the night.

“Can we still be friends Legolas?” Storm asked tentatively.  “Are the misunderstandings cleared up, the harsh words forgiven?”

“I don’t know Storm,” Legolas tried to hide his laughter.  “The Prince of Mirkwood is not often called a ‘spoiled brat.’  Perhaps I should demand a grander apology.”  Legolas eyes twinkled.

“If I were sorry for calling you a spoiled brat would things be mended between us, would we be friends again?”  Storm’s question was sincere.

“What if I wish more than your friendship Storm of Lothlorien?” Legolas asked, more serious and reflective.  “What if I told you that I wish to be the one who eases the loneliness of your heart, who brings the smile back to your face?”  As if it had a mind of its own, Legolas’ free hand reached out to gently caress her cheek.

Storm shivered slightly at his touch.  Legolas read surprise but also curiosity in her gaze.  He placed his goblet on the wide railing and stepped closer to Storm, his fingers still touching her cheek lightly.  “You said to me yesterday that you were sure that I would have no trouble winning the heart of any maiden in the House of Lorien that I desired.  Did that include your heart, Storm of Lothlorien?  Is your affection, your love, a prize I can aspire to in these lands of Lothlorien?”  Legolas’ voice was soft but urgent.

Storm met his gaze, emotions chasing cross her face.  He felt her open herself to him, to the possibilities of what could be between them.  Her eyes were full of feeling.  “I believe, Legolas of Mirkwood, that if you desire it, my heart is already yours for the asking.”  Storm brought her own hand up to lightly touch Legolas’ where it rested on her cheek.

“I very much desire it,” Legolas whispered, bridging the distance between them.  His empty hand cupped Storm’s other cheek and slowly guided her face up to meet his.  With the stars burning brightly above them and the music from the great hall drifting around them, Legolas gently but passionately kissed her mouth.